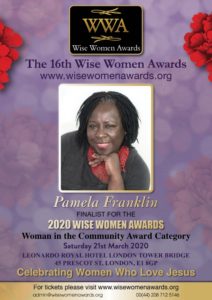 Pamela Franklin studied IT and Communication at South Bank. She started her training business from home in 1989 before moving into offices in Baker Street.
In 2010 she was diagnosed with a spinal condition and was informed that it could reoccur. Pamela struggled to accept the doctor’s diagnosis and became withdrawn..

Two years later Pamela attended Super Saturday at the 2012 Olympics, as a VIP and fourteen days later became a patient at an NHS hospital for three and half months, as she had a relapse. She stayed grateful to the point that the doctors were confused! She left hospital with crutches, her home was fitted with mobility aids and she had to close her offices of nearly 20 years.

Despite being a Christian of nearly 30 years it was not easy for her to spend 18 months of loneliness and watching daytime television. She again became withdrawn as well as depressed.

A conversation in 2015 with a retired couple from the Windrush Generation led her to start the Caribbean Social Forum as they were also experiencing isolation and loneliness. The CSF started with 12 people and now host 100+ every Thursday with 600 registered members. The CSF has won several awards including the Community Organisation for Race, Faith & Religion category at the National Diversity Award in 2017.

Pamela sees the CSF as her ministry and can often be heard telling members that it would seem easier to look behind, but it serves no purpose as God’s plans are ahead but with lessons to be learnt from the past.