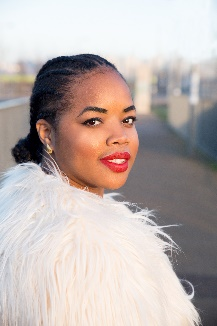 FLORENCE ADEPOJU While studying at BSc (hons) Cosmetic Science at the London College of Fashion, Florence worked on a make-up counter and was exposed to several brands, it was here where she noticed a niche in the market. She felt established make-up giants weren’t experimenting with new and exciting colour palettes so she decided to establish her own brand. This was the birth of MDMflow, inspired by 90s hip hop culture and bright colour palettes.

Harvey Nichols now stock her brand making Florence Adepoju to become a leading cosmetic science who is featured in the media worldwide, including features in The New York Times and the London Evening Standard.

Florence Adepoju has also teamed up with EDF Energy and is working tirelessly on a campaign called Pretty Curious to address the lack of women in science and to promote STEM careers to young girls around the UK.

She is a committed born again Christian.