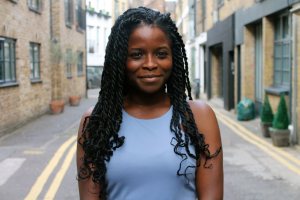 Elizabeth was born in Nigeria, at a young age joined her family in the UK. At 26 years old, she has had one of the most distinguished careers for someone her age. Starting at Standard Bank, then moved on to become a leading analyst at Bloomberg Plc, before leaving her job in the city to support a new generation of African Caribbean business owners.

Elizabeth currently Head of Enterprise Development, oversees a business division which has supported over 8000 start-ups since 2012. She has been involved in setting up and growing businesses over the last 10 years herself. EN Campaigns was previously the fourth largest provider of business Start-Up Loans in the UK, working with the Department for Business Innovation & Skills. Her passion for social mobility meant that 80% of loan recipients were classified as underrepresented (72% are from an ethnic minority backgrounds, with close to 40% being female). Elizabeth oversaw the delivery of this provision on multiple sites primarily in London, Sussex, and the Midlands.

In her current role as Head of Enterprise Development at EN Campaigns Elizabeth has been key to its growth from a small start-up to being one of only 2 delivery organisations of the governments flagship welfare to self-employment programme; New Enterprise Allowance (NEA) in London. Through the NEA Elizabeth has managed a team that supported over 2600 unemployed people to set up businesses since January 2015. This life changing programme has helped a broad range of people, including ex-offenders in need of a second chance in life.

The NEA Phase 2 model design was based on EN Campaigns existing delivery model where they have workshops before customers are referred and have more than the contractual face to face interactions. Elizabeth has supported 1000s of small businesses a year through the development of business plans, cash flow statements, and access to capital. She also helps to deliver enterprise related skills programmes including a Level 3 Business Diploma accredited by Pearson, ABE, and Skills First. Elizabeth won best student for her MBA in 2016, where she received a distinction.

She is also one of the founding members of Young Black & Successful, one of the leading initiatives set up to showcase black role models within communities where they aren’t as visible set up at South Bank University.