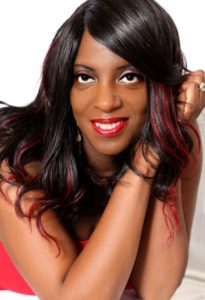 Sandra Godley is one of the UK’s much sought after Singer Songwriters, Broadcaster and Host. Already a recipient of the prestigious Wise Woman Award for Woman in Music in 2014, she is fast becoming the go to person and mentor for many professional or unsigned gospel artists.

Sandra received a coveted MOBO nomination in 2014 as well as many awards including ‘Best International Song’ at Italy’s Gospel awards.

As a Trustee of Radio Plus, a community radio station based in Coventry, Sandra helped shape the organisation from the ground up which went on to successfully receive a Queen’s Award for Voluntary Services, an achievement she is particularly proud of.

Music and mission go hand in hand with Sandra and much of her international work includes being a Trustee for Feed The Hungry, a global charity feeding orphans. She’s recently returned from Uganda where she had the privilege of singing to thousands of refugees based at Kiryandango Refugee Camp.

Other achievements including performing twice at The House of Commons, celebrating the life of Nelson Mandela, many BBC radio performances, perfoming to a football crowd of over 22,000 people and supporting gospel artists including William McDowell as well as performances at many music festival.

Her broadcasting extends across the globe via her work with UCB radio and Finding My Way radio network, presenting regular shows featuring music, chat show and inspirational content.

Sandra has recently recorded her 4th album ‘Diamond Fusion’ in Nashville, which is due for release early 2018.