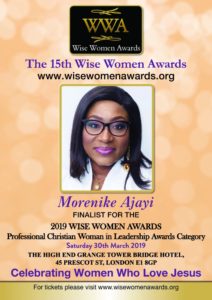 Morenike Ajayi is a Multiple award winner, an Accountant, Author, Inspirational public speaker, Executive producer and TV presenter. She is happily married to Kenny and they have a son – David.

Abandoned by her dad when she was 18 months old, her mum was left to single handedly raise her and her sister alone, under tough financial conditions in Nigeria, having relocated from the UK at a tender age of 9 years.
Her mum was a firm believer in education, so home taught Morenike as she could not afford primary education.

Age 16 was a Ah!Ah! moment for Morenike… she became a born again Christian and discovered who she really was in Christ – she discovered her God given purpose. This drove her towards pursuing a career in Computer Science and then Accountancy. Her pursuit required faith, determination and resilience. Now, she holds a full time role as a Head of Finance with a London Housing Association.

The higher she climbed in her career, the more she realised the disadvantages stacked against Black Minority Ethic (BME) professionals who had technical skills but limited access to career progression. Her restlessness and need for change led to the birth of “Career Nuggets” in June 2015. Career Nuggets is a social enterprise comprising of a Career development TV programme and an event arm designed to educate, inspire and empower people aspiring to advance in the workplace via workshops, seminars and a career club. Morenike is also the Executive producer and TV presenter of “Career Nuggets” TV programme, which she solely funds by herself. In addition, Morenike is a seasoned public speaker and regularly speaks in churches and at various christian conferences too.

To date, Career Nuggets has supported several people on their career journey. It is Morenike’s desire and passion to see more BME women in the boardroom making positive decisions that will influence our community.