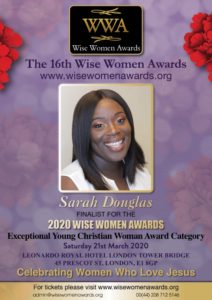 Sarah has been extremely instrumental in the spiritual, moral, social and cultural formation of young people throughout UK and further afield. Following graduating from the University of Kent, with a BA (Hons) in Criminology, Sociology and Law, Sarah has worked for several different organisations in the UK and Ghana including Operation Smile, International Health Partners and The Challenge. Currently Sarah works as a progression coach for ThinkForward, an independent charity who provide long-term personalised coaching to young people at the highest risk of unemployment, to enable them to transition into sustained work.
Outside of work, Sarah volunteers as a mentor as part of a local run mentoring programme, whilst also privately mentoring and coaching 15 young women in the UK and abroad.

As well as acting as a mentor and coach, Sarah is one of the Young Adult leaders at her Church.

Sarah has also recently launched her latest initiative “Qoshie” a social enterprise that empowers young people in Ghana to transform their own lives through entrepreneurship and creativity.

Sarah is married to Leondre, who is an Assistant Headteacher and Minister at Trinity Baptist Church. They have been married for 5 years and live in Sutton, Surrey.