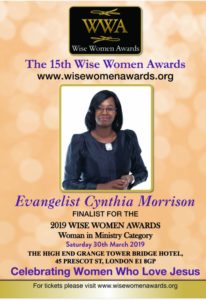 Evangelist Cynthia Morrison is an anointed woman of God and the Founder of Passion, Place & Purpose (PPP), an annual conference held in September where women throughout the United Kingdom unite to hear other anointed women of God, who empower and propel them into their destiny and prepare them for Kingdom service!

As a native in the United Kingdom, Evangelist Cynthia Morrison emerged as a sought after, prolific preacher and teacher who travels extensively, throughout the United Kingdom and abroad, impacting lives through the preaching of the Gospel of Jesus Christ. Her former ministry training, where she served for almost four decades, was held at Bethel United Church of Jesus Christ (Apostolic) in Birmingham, West Midlands under the leadership of Bishop Sydney A. Dunn. During which time, she held numerous positions serving on both local and national levels in the church and within the Bethel organisation. In addition, she also served for several years as a Lecturer at Bethel’s Institute of Biblical studies (BIBS).

Evangelist Morrison is honored to be selected and hold positions as a Trustee for several organisations, including the Council of Black Majority Churches in the West Midlands.

Presently, Evangelist Morrison is a worshipper and Associate Minister of New Harvest Community Church in Leicester. She is the wife of Glenn Morrison and they have been blessed with three beautiful children, Melissa Esther, Nicholas James, and Abigail Leah.