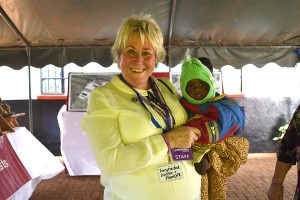 Mrs Terry Fairfowl has been ministering to people with disabilities in Northern Ireland and in Kenya for over twenty years.

Her passion for ministry to people with disabilities began with a friendship. May suffered from debilitating MS, and Terry, despite being a housewife with four children, would take May to church on Sundays after helping her to get washed and dressed. This became more difficult as May lost the use of her arms and legs, and eventually lost her eyesight, speech and even the ability to swallow.

Terry was a faithful friend to May for many years until she died, often reading the Bible and singing choruses to her. Through this, Terry became aware of how overlooked people with physical disabilities can be, even in church.

A passion for ministering to the disabled was born inside of Terry, and soon she founded “The Befrienders”, which has been running at the Whitewell Metropolitan Tabernacle Belfast ever since. The Befrienders provide support to disabled people, taking them to and from church in specially-equipped buses, and organising for carers to sit beside them so that they feel fully part of the congregation.

At first, there weren’t any buses or volunteers, and Terry had to step out in faith. She often talks now about how God provided for each need as it arose through a mix of faith, divine provision and a LOT of hard work! She often paid for transport from her own pocket, and poured hours of her time into organising special days out for the disabled people in her community. By 2004, the ministry saw 150 disabled brothers and sisters being brought out to church and non-church activities four times a week, with a fleet of 12 buses and 60 carers!

In 2005 Terry was asked to go to Nyeri, Kenya with Wheels for the World. She was shocked at the plight of disabled people there, and as soon as she returned to Belfast she started work to establish The Metropolitan Sanctuary, Nyeri, which now provides free therapy and medical treatment for children with disabilities, a day care centre so they can be cared for while their carers go out to work, a rescue home for vulnerable children, and a workshop making disability equipment from cardboard.

All of this sprang from Terry’s heart for the disabled children of Kenya, and she has been tireless in organizing and leading annual team trips there, fundraising, and gathering donations of equipment and clothing. Nothing is EVER too much trouble if it will help the children. Over the years she has arranged for no less than 4 huge containers of medical supplies (donated by local hospitals after Terry got in touch to tell them about the work!) to be shipped from N. Ireland to Kenya.

In 2014, the charity Befrienders For Disability was established so that the work could expand further. Terry is one of the Directors of the charity, and her involvement is the driving force behind so much of what we do.

She is beloved by so many whom she has helped over the years. She’s ALWAYS ready to give a hug. She has also given more than anyone will ever know in terms of time, energy, tears and personal resources to the ministries for disabled people both at home and abroad. She has personally provided for so many from her own pocket; her generosity overflows towards those who are needy.

Recently, Terry has been struggling with her health as she suffers from COPD, which affects her breathing. This has made the trips to Kenya especially hard, but she is so in love with the work that she would never consider staying at home. Whenever she visits Kenya, the welcome she receives is a delight to see; she is called “Mama Terry” and all those who attend The Sanctuary know and love her.

Terry’s tireless efforts, strong faith, huge heart for the disabled and unwavering belief that love is the only thing that is needed for change to happen are an absolute inspiration. She often talks about how she is ‘only a housewife’ with no qualifications (she was orphaned at the age of 14), but in reality she has given what she has to God and she has been used mightily by Him as a result. Terry is such a shining example of someone for whom the reality of faith makes a difference. Although Terry is not from the black community, I would love it if she were considered for this award because she truly epitomizes a woman of God for me. She is moved to tears so often over the plight of the needy, but her love for them moves her to ACT, which makes her truly special.