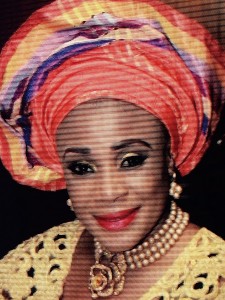 She is the CEO of LvLv Events Ltd, Fly LvLv Travels, founder of Int’ll Women of Power; Co-Founder, Nigerian Events Awards UK. She is a minister for Christ Kingdom at The New Life in Christ Ministry, Dagenham.

Lady Vanessa has built London’s leading Luxury Afro-Caribbean Event Mgt Company – LvLv Events from the scratch during perhaps the toughest economic period in the history of London’s entertainment scene since 2008.

Lady Vanessa has a very positive attitude and what she calls the ‘pants of power’, and has led a small team of 4 people forward, recruited an apprentice yearly and developed the team’s skills, empowering them to grow their business and diversify.

Lady Vanessa have built the brand nationally & international with Speakers from across all nationalities. Past Speakers at the business shows includes Mayor of Enfield – Kate Anolue, Celebrity TV Star – Kimberly Davies of the Apprentice, Sonia Brown MBE, Muzvare Betty Makoni (CNN Hero), Claudine Reid MBE, Mavis Amankwah, Debbie Alleyn Da-Gazon and a host of other powerful speakers. The Int’ll Women of Power Business Show is going into her 4th year and have helped over 50 women to establish their own businesses across the global.

Lady Vanessa business acumen has built a successful business with a strong focus on Female entrepreneurship, Media, Branding, Promotion and Awards Presentation. She has mentored many SMEs raise funds, organise their events while she brought the business into a positive financial situation and always gives her time freely to advise others where she can.

LvLv Events & Designing Academy is a Bi-yearly Venue Styling Workshops in floral, Balloons & Drapery Artistry workshop organised by her since 2010. Vanessa have helped over thirty new businesses in U.K by training, mentoring and coaching the Business Owners in the art of Events Decorating since 2010 and her company have decorated over 500 social and corporate events since establishing the business in the UK in 2008 including The Olympic Dinner Party organised by the Nigerian Embassy in 2012, The Enfield Mayoral Ball, Park Inn Hotel Thurrock Xmas Parties, Obi of Onitsha Royal Wedding, Women for Africa Awards 2012 & 2013.

Lady Vanessa was the Committee Chair – Decor & Catering for the Nigerian Centenary Awards UK. Her company co-designed the venue and catered for over 700 guests at the high profiled event that had the Nigerian High Commissioner to the UK, Dr Tafida with his 16 ministers in attendance.

Her company also co- founded and organises the Annual Prestigious Red Carpet Black Tie Nigerian Events Awards (NEA UK) which is in its 3rd year and have over 250 Professional Events People based in the UK celebrating their successes yearly. This prestigious awards show was endorsed by Mayor of London – Boris Johnson in its inaugural year.

Lady Vanessa won Exemplary Business Award by Life Changer for her Networking Platform (Black, Asian Minority Entrepreneurs), Mentoring and empowerment role (IWOP Biz Show) in UK; Gathering of African Best Awards UK 2014, True African Heritage Award 2014 for her empowerment Business Show, a recipient of the Star Award from Lift Effects Organisation 2014 & 2015, Winner, True African Woman Award for corporate responsibility, Winner of Black African Women Rock Award for Event of Year (NEA UK) 2014 and a finalist at Women4Africa 2013 & 2014 and a nominee for Entrepreneur of Excellence of the National Diversity Awards UK.
Entrepreneur of the Year from Divas of Colour 2015 and recently Star Award from Lift Effect Org 2015. She was the Sub-Chair for event dinner & decor for The Centenary Awards UK 2014 & recognised by the Nigerian High Commissioner to the St James Court, Dr. S. Tafida, OON, CFR.

Above all, Lady Vanessa consistently sticks to her Christian ethos of giving something back through the charities she supports