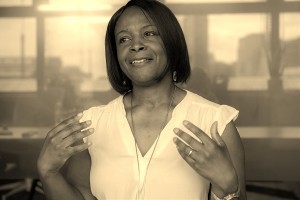 Denise Bentley was a City forex dealer and management consultant when at the age of 40, she suffered a brain haemorrhage. It was her 10-year-old daughter who found her passed out on the kitchen floor. Denise herself had lost her 40-year-old mother, a seamstress, also to a brain haemorrhage when she was ten.

In this case, due to the brilliance of her doctors, Denise survived, but she was far from back to normal. She was paralysed down her right side, had double vision and couldn’t stand up. She became depressed and began thinking, “Why did I live?” However, Denise would go on to make a full recovery and with her clean bill of health began to look at life differently.

She decided to try and live less selfishly and help others, so went to volunteer at [homeless charity] Crisis, but what she saw there devastated her. She saw homeless people caught up in a cycle of despair who seemed utterly defeated. She then decided she wanted to give dignity and a voice to people who didn’t have one and went on to found a charity called the First Love Foundation. Five years ago, backed by the Trussell Trust, she then went on to start the Tower Hamlets Foodbank.

Located in the shadow of Canary Wharf, demand for its services has soared ten-fold to 200 new referrals a month, 40 per cent of them children.

In 2014 they collected 12,428 kg of food to become one of the largest food banks in London, in a borough where the average Canary Wharf salary is £95,000 and yet which suffers the highest child poverty rate (50 per cent) in London. “Canary Wharf might be just across the road but for people who use our food bank it’s like a million miles away,” says Denise.

According to Denise, the biggest reason people wind up at the food bank is benefit delay or a change in benefits. Food parcel recipients — who have to be referred by GPs, social workers or other welfare agencies — can only use the food bank up to three times.

The model at Tower Hamlets Foodbank, known as “food bank plus”, provides benefits advice, the goal being to avoid creating dependency. They give out two tons of food a month and it is all donated, much of it by people working in Canary Wharf, shoppers at the local Tesco or Asda.

It is because she once worked in the City that she feels she understands the mentality of offering a hand up rather than a hand out. Denise attributes her passionate social entrepreneurial spirit to her father, a labourer, who brought her up in Willesden after the tragedy of her mother’s death. “Dad worked at a factory making baths and after mum died we really struggled financially,” she said. “But my biggest memory of that time is my dad’s generosity. He grew potatoes and spinach in our garden and he gave it to locals who were struggling, even though we were too. You could say that he ran a food bank!” she says.

Denise estimates that her Tower Hamlets Foodbank has helped more than 5,000 people to get back on their feet in the past five years.

What they do: Founded by Denise Bentley, they provide food packages and benefits advice for people in crisis referred by other agencies. They provide advice and a direct link to other services to support clients in whatever issue they face behind their food poverty.