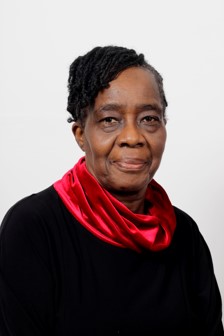 Brenda Cox has worked tirelessly and consistently over the last 40 years in the NTCG Harrow. She has held many positions but the one she is most passionate about is undoubtedly missions.

Brenda has been leading on missions in NTCG Harrow for more than 20 years. She has co-ordinated efforts to send barrels of supplies to Ghana (churches in poor northern province), Cameroon (funds for church ) Jamaica (after Hurricane Sandy) and ( support church outreach in Oracabessa in St Mary), Grenada (after Hurricane Ivan in 2004), Barbados (children’s home) St Kitts (prison and children’s home Sept 2015).

Every year, Brenda hosts (and prepares) a very popular potato evening to raise funds to support missions and has regularly gone on sponsored walks to support the missions drive.

Brenda also collects second hand clothing to provide for those in need and to raise funds to support those in need.

Brenda is relentless in her pursuit to help those in need; this is symbolised by her naming her missions efforts, “Where There is a Need”. She has galvanised a team of like minded people in the church to work alongside her and is known for her no nonsense approach to missions. Pull your weight or you are out.

Brenda also volunteers each week in the church’s own charity, Sunrise Senior Citizens, where she helps to prepare meals, visits the sick and assists with events.