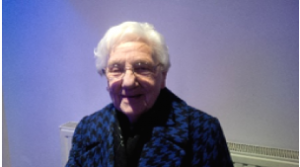 83 years old Kathleen Lucas served as a missionary in Rwanda and Congo for about 40 years in war time with death threats, reluctantly leaving only when she had to be evacuated and returned to the UK. At the earliest opportunity, would return back to Africa to continue serving Jesus Christ who she still actively serves till today.

Kathleen dedicated her life to Jesus at 12 years old. Very soon after she left school she felt God speak to her and challenge her to surrender the whole of her life to him when singing a song: “Lord, send me.”

A trained teacher with a diploma in French she prepared as a missionary to the Belgian Congo (now the Democratic Republic of Congo). In August 1957 she went to Belgium to study and prepare herself for the mission field. She left for Central Africa on 9th November, 1958. Kathleen worked in Lamera with Scandinavian missionaries teaching people to be teachers and pastors.

In June 1960 independence came to the Congo and for a while all remained quiet in Lemera. In February 1961 Kathleen and a number of other missionaries were held prisoners, eventually were able to escape to Rwanda.

Kathleen came back to England and shortly after returned to the Congo. In May 1964, life became challenging again. Kathleen along with other missionaries were held under house arrest for 4 1/2 months. They were threatened with death; however, a week long prayer chain had been started in the UK. Eventually Kathleen was evacuated back to the UK. Although Kathleen returned to the Congo in 1966 things were still very unsettled and so in 1970 the work was handed over to African leadership.

Kathleen moved to serve God in Rwanda working in schools but then she began to train pastors and evangelists. She was responsible for building four large brick built churches and became head of Religious Education in a school and preaching at the churches weekends. A training college was opened for teachers and Kathleen was asked to head it. In 1988 the school was awarded State recognition. When Kathleen eventually came home to England in 1992 it had over 400 students.

Since returning Kathleen serves in Bethel Church. For a time, she ran an Alpha Course in French, runs a small group, works in the ministry’s Hope Course for the bereaved and constantly visits the sick and elderly despite being almost 83 herself!! She also visits the church plant in France.

As a church we salute this giant of the faith!!